Part 2: Restore and Boot from an AWS EC2 Volume Image

Eric Smith is the Chief Technologist and Chief Information Security Officer (CISO) for FireOak Strategies, LLC. You can reach Eric at [email protected] or follow him on Twitter at @FireOakCISO. 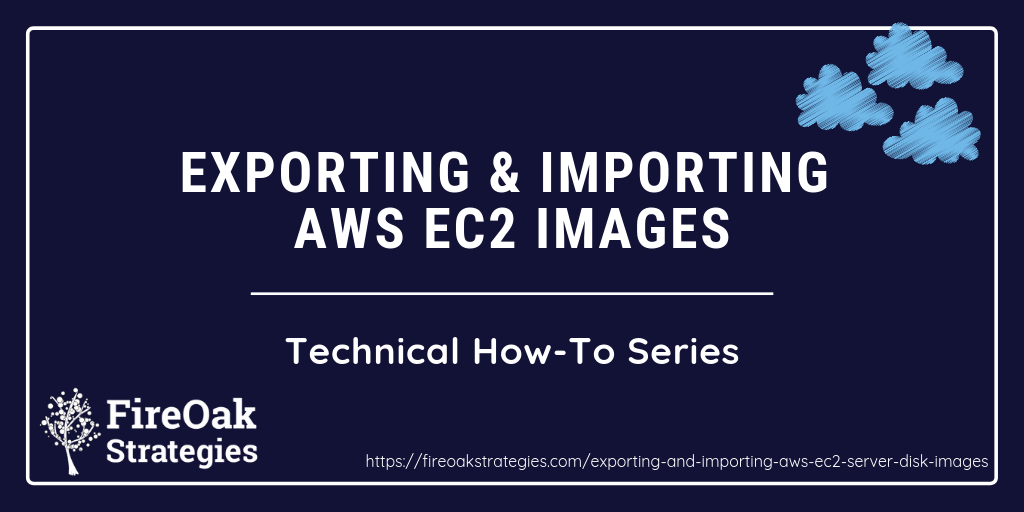 This blog post is part two of a 3-part series describing a technique for how to export and import Amazon Web Services (AWS) instance volume images. Read the full introduction for more details. Part 1 is available here.

In this post, I’ll demonstrate a technique using standard Linux tools to create a bootable AWS EC2 instance from an imported AWS volume image. For the demonstration, I will restore and boot a Windows domain controller from an archival disk image that had been stored in Google Drive.

How to Restore and Boot from an EC2 Volume Image

Step 1: Copy the Image into EC2

The first step is to copy the archived volume image to the build server in EC2.

For this demonstration, I used rclone to copy an image of a Windows 2016 domain controller from Google Drive to the build server.

After your image has been transferred and uncompressed, use fdisk to perform a quick sanity check on your image.

The partition table within the image confirms that it is a 30GiB image with a single NTFS partition, which makes sense for a windows server.

It doesn’t matter which Amazon Machine Image (AMI) you choose, since the operating system will be loaded from your disk image. Select an appropriate instance type based on your specific CPU and RAM requirements.  Create the instance with a root volume the same size as your image.

Be sure to launch the instance in the same availability zone as your build server. If you have specific IP address requirements for this server, specify them during the instance setup process since you can’t easily change them later.

After the instance is created, stop it and detach the root volume.  You will overwrite this newly-created volume with the volume image.

Step 3: Attach the Volume to the Build Server

The next step is to attach the volume to your build server.

On the build server, use the “fdisk -l” command to find the device name of the new volume.  In this example, the volume is available as /dev/xvdf.

Copy the image to the new volume using the “dd” command.

Once the copy is complete, mount the volume to confirm that the copy worked correctly.

In this case, we have an NTFS partition that contains a Windows volume.

Note:  This nomenclature is confusing; the volume contains a disk image, not a partition, so I would think /dev/sda would be the proper attachment point. But the server will not boot unless you specify /dev/sda1 as shown here.

You can now start the instance.  The “Get Instance Screenshot” feature in EC2 webUI provides a quick way to see what is happening on your virtual server’s console.

The instance should now be up and running.

In Part 3 of this series, I’ll demonstrate how to automate the process of creating and archiving disk images.

FireOak Strategies is a boutique consulting firm that helps organizations manage, secure, and share their knowledge. We bring clarity to complexity, look for elegant and simple solutions, and make sure that organizations are focused on solving the right problems. Learn more…

More from the FireOak team about managing, securing, and sharing knowledge

Is your staff ready to work from home en masse? Consult the FireOak Strategies Coronavirus Cybersecurity Checklist to prepare your organization.

What’s the state of email security for the 2020 presidential candidates? And what about the security of candidates’ websites? Read more for our analysis!

Continue Reading Email and website security for the 2020 presidential candidates

4 ways in which the deleted Epstein surveillance video highlights gaps in an organization’s cybersecurity program, and what you can do to prevent such nightmares at your organization.

The FireOak team will be at the KM Showcase 2020 in Arlington, Virginia. Stop by our booth to chat about all-things knowledge management!