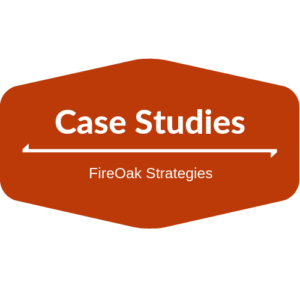 Many of our NGO clients are focused on international development or humanitarian aid work. Typically, these organizations have staff working around the world, often in small, isolated offices without an on-site IT team. For all organizations with staff in multiple locations — even if separated by just a few miles — adopting tools that allow staff to easily and securely store and share information, data, and knowledge is critically important yet can be a real pain point.

One such organization had several offices throughout Asia and Africa. This organization had successfully deployed Office 365 to all locations, with the intent to have all staff members use this platform for securely storing all organizational information, data, and knowledge. The plan was to use several components of the Office 365 ecosystem for real-time collaboration and communication, data storage, sharing content with external partners, and more.

But in the months after Office 365 had been deployed, adoption was quite low. Staff members from offices in remote locations, particularly those in locations that had a reputation of having “bad internet access,” were repeatedly reporting that they were unable to use various components of Office 365. Skype for Business calls kept dropping out, files were getting stuck when they were trying to sync to the cloud, and staff members were frustrated.

As a result of these problems, the IT team at headquarters started to research alternatives to Office 365. But instead of rushing to invest in another suite of platforms, a senior leader within the organization reached out to FireOak Strategies. He wanted to make sure that they were solving the right problems.

The offices where staff were reporting issues with Office 365 were all in locations without dedicated IT teams. Headquarters remotely provided tech support, but only when someone called about a specific problem. Our team was sent to a few of these offices to take a first-hand look at the situation, diagnose the problems, and recommend solutions.

In several of these locations, the organization was hosted by a local government ministry. In one such location, we ran some diagnostic tests and quickly identified that one of the key problems was not the internet connection as everyone assumed. While the internet connection was slow by some standards, it was completely adequate to meet the needs of Office 365 and other knowledge management tools that weren’t properly functioning.

Since the internet connection wasn’t the culprit, we turned to the wireless network which was abysmally slow throughout the building, even within the government offices located on premises. Indeed, we determined that the issue was with how the organization’s wireless network had been deployed. In one small building with several tenants, all of the access points in the building — over 30 — were running on channel 6, a networking problem referred to as co-channel interference.

Co-channel interference occurs when multiple access points are running on the same frequency channel — in this case, channel 6 within the 2.4GHz band — and are close enough to each other that they’re interfering with each other’s signals.

Our team’s expertise in all aspects of information management — including information technology — allowed us to quickly diagnose and address the co-channel interference problem. Installing a commercial grade (rather than home-oriented) access point, a $100 investment, allowed us to put the organization’s wireless network on a different channel and frequency.

Addressing this particular issue allowed us to move to diagnosing a host of other related information, data, and knowledge management issues. While we were on-site, we were able to immediately address several of these issues related to the technical infrastructure.

For instance, we tuned the quality of service controls in their existing firewalls to maximize performance for latency-sensitive applications such as Skype for Business, Teams, and One Drive. We were able to prioritize network traffic to these applications over other traffic that wasn’t mission critical such as YouTube, Facebook, and video streaming services. These enhancements were all possible with the organization’s existing hardware; the firewall worked, but it needed some fine-tuning to best support the needs for this particular office.

Another cost-effective infrastructure change that provided tremendous benefits to this client was the installation and deployment of a Windows Software Update Server. Staff workstations could then obtain their operating system updates from the on-site server, instead of saturating the limited internet connection trying to download them directly from Microsoft. In addition, in consideration of local bandwidth constraints, we recommended configuring firewalls to allow the local Windows Software Update Server to only obtain updates after hours or on weekends. The combination of these two enhancements improved security and freed up bandwidth during working hours. As a result, workstations were installing patches much faster and more consistently.

At FireOak, we’re committed to our clients’ success, which means solving the right problems. In this case, being on-site allowed us to get a first-hand look at systems that couldn’t easily be diagnosed remotely.

Most importantly, we were able to save the client a tremendous amount of pain and expense associated with replacing a fully-functional system. Had we not diagnosed and addressed the root causes that were triggering staff to report system failures, the same issues would have plagued adoption of any information/knowledge management platform. Instead, we were able to quickly and easily address the root causes, and we could move on to helping the organization adopt Office 365 in more transformative ways!

A large organization developed their own in-house platform to support their operations. The platform itself worked well, but managing information and knowledge about the platform was a challenge.
Read More

A growing non-profit organization was worried that their knowledge management practices were slowing them down from achieving their mission and goals as effectively as possible.
Read More